Immerse yourself in Latin America's colonial past exploring its best-preserved city. Discover the beautiful historic buildings of Quito on this guided city tour. 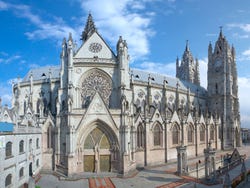 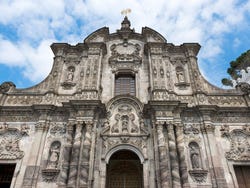 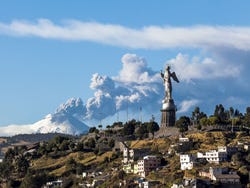 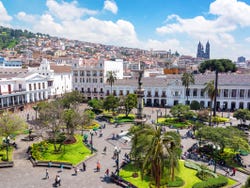 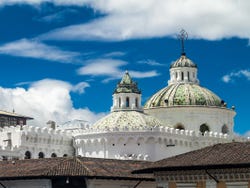 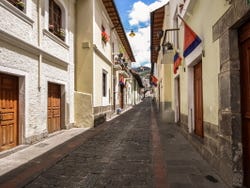 On the day of your tour, you'll be picked up from your hotel, ready to begin exploring the most emblematic sights around Quito. We'll board an original trolleybus, a replica of the trams used around the city until the 20th century, and head to the modern area of the city, before going to the historic centre named a UNESCO World Heritage Site.

Our first stop on the tour will be a building that stands out against the city's skyline: the Basilica of the National Vow. This magnificent Neo-Gothic-style church is reminiscent of Paris' Notre Dame Cathedral. Filled with its history, we'll head to the Panecillo Hill, and as well as seeing the Monument to the Virgin of El Panecillo up close, you'll enjoy spectacular panoramic views of Quito.

You'll then reach the Plaza de la Independencia, also known to locals as Plaza Grande, the city's main square and home to some of its most important buildings, including the green-domed Quito Cathedral, the Government Palace and the Archbishop's Palace. If you carry out this tour on a Monday, you'll have the chance to see the Changing of the Guard.

The nearby Compañía Church is another highlight of this area. Considered by many to be Ecuador's most beautiful place of worship, the building's interior is sumptuously decorated with ornate carvings and gold leaf.

Our tour of the romantic Ronda neighbourhood then continues, and here we can find a great selection of artisanal shops. Then, following four hours tour discovering Quito's cultural and architectural treasures, you'll be dropped back off at your hotel or the Galería Equador.

This tour includes a pick up and drop off service for the main hotels in Quito: Sheraton, Dann Carlton, NH Collection, Swissotel, Holiday Inn, Mercure Alameda, Reina Isabel, Nu House, J.W. Marriott, Howard Johnson and Hilton. If your accommodation is not listed here, the meeting point will be at the Holiday Inn.

If your hotel is not on this list, or you would prefer to meet the tour at the main meet point, you should make your way to the Galería Equador (on the corner of Reina Victoria N24 - 263 and Lizardo García).

* A reservation for one person will include a supplement.

Tours or activities will not consist of more than 16 people per group.

The activity takes place with a guide that speaks in english and spanish.

Entrance to the Panecillo viewpoint.

You can book up to the start time, as long as there are places remaining. Book now to guarantee your spot.

Free! Free cancellation up to 48 hours before the activity starts. If you cancel under this time or do not show up, you will not be refunded.

I travelled with friends
6

I travelled with teenagers
10

I travelled with friends
6

I travelled with friends
Show all the reviews
like

10 / 10 1 review
Enjoy a day surrounded by nature in a magical forest declared a Biosphere Reserve with this Mindo Day Trip. Be immersed in the peace of the Ecuadorian jungle.
US$ 65
Book
like Free

9.10 / 10 57 reviews
Discover Quito's historic centre and learn the secrets of its cultural heritage on this free walking tour of the Ecuadorian capital.
Free!
Book
like

8.60 / 10 47 reviews
Leave urban Quito behind and lose yourself in the natural beauty of Cotopaxi, one of the world's highest active volcanoes, and Quilotoa volcanic lagoon.
US$ 54
Book